BSW: Thank you for speaking with us. Can you tell us about your winery?

MD: We have 150 hectares of terroir in the Bessa Valley and have been growing since 2001. In 2001, we only produced Merlot, Cabernet and Syrah varietals. From 2003-2007, we were looking for a style. We found our style with the 2008 vintage. We developed our blend with not too much Cabernet and a lower percentage of new wood. We produce 650-700,000 bottles annually and do not use any purchased grapes.

BSW: What makes the Bessa Valley special for winemaking?

MD: It's the terroir (soil). In November-December 2000, we were walking down the hill and I noticed the chalkiness and limestone in the soil. When we started growing in 2001, I realized the soil was even better than we originally thought. All I wanted to do was not make any mistakes.

BSW: Can you describe your current collection of wines?

MD: I will describe our collection for international markets. We have other wines that are sold primarily in Bulgaria. Easy by Enira is a Merlot varietal. It is aged 80% in barrels and 20% in tanks. It is young and fruity. In June, we will change from the 2008 to the 2009 vintage. There is also a Rose by Enira which will switch from 2009 to 2010 in June.

Cabernet by Enira is a velvet cabernet which we achieved by 12 months of barrel aging and less maceration and extraction. Our standard Enira blend is mostly Merlot which is aged 90% in the barrel and 10% in tanks. We will switch from 2007 to 2008 in June. The Enira Reserva is a blend of Merlot, Syrah, Cabernet Sauvignon and Petit Verdot. In June, the 2007 Enira Reserva will be available. BV by Enira is our super premium wine which is aged for 18 months in new French oak barrels.

We also have a pure Syrah varietal, only 3000 bottles were produced, that is aged 18 months in the barrel. We are currently selling the 2008 Syrah.

BSW: Why have Enira wines made a name for themselves internationally?

MD: We put real soul into the wine. We try to put in the smooth tannins that come from the chalky soil. Our wine has become known because people taste it. Importers would ask "Why do I need to know about Bulgarian wine?" I would say, "Just taste the wine." They would try the wine and could not believe the taste or the price. The wine is fruity, woody and balanced with the right amount of alcohol. It's all about the balance.

BSW: What is the price point for Enira wines?

MD. The standard blend is 12-14 Euros, Reserva 18-20 Euros, and the BV 30 Euros. This is approximate as the price can vary in different markets.

BSW: What can we look for in the future from Bessa Valley?

MD: We will plant some whites in 2012. We expect to produce Chardonnay and Viognier in 2015. There may be some new blends on the Bulgarian market.

BSW: Is there anything else you would like people to know about your winery?

MD: We are very proud that effective in September we will provide the Business Class red wine for Lufthansa in 2012. For a young winery from a small country, this is a huge success and recognition of our achievement. This is both a commercial recognition and a recognition of our wine. Also, we are selling more and more in Asia. 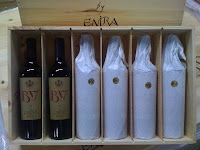